BitHashMiner was a vaporware scam notorious for being very poorly executed and persisting carelessly. A single product was offered, also called a BitHashMiner, which was a preorder mining rig with supernatural specs at an unrealistically low price. The scam has been labelled by onlookers as "thread gold",[1] "hysterical",[2] "the most blatant scam attempt",[3] "the yoda sales force",[4] "obvious scam",[5] "mind blowing",[6] and "half ass attempt to scam people".[7] It is remembered as the most futile scam attempt in Bitcoin history and is used as a textbook example of vaporware, helping people identify scams on their own.[8] 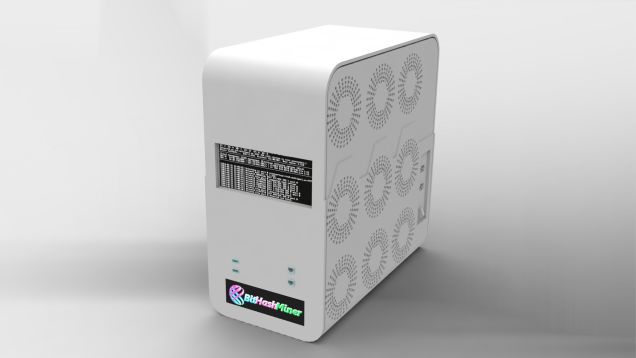 The 9 lb. rig itself featured 10 Thash/s for $1000, with 25 20nm ASIC chips.[9] There is a screen on the miner depicting a CGMiner instance with two graphics cards Scrypt mining in late 2013.[9][10] There are also two 750W power supplies,[9] which weigh about 5 lbs. each,[11] meaning that the casing, fans, and chips must have negative weight, and would be at risk of floating away without the power supplies weighing them down.[12]

There was an enforced limit of two items per buyer,[9] which is a telltale sign of a dishonest sale.[13]

The rigs were offered with free shipping and a five year warranty, and were expected to ship in April.[9][14] By February 12, the BitcoinTalk account of BitHashMiner was inactive and the website was down; no units ever shipped.[1]

On February 5, 2015, BitHashMiner issued a statement[15] declaring that Taras and TheRealSteve, prominent editors of the Bitcoin Wiki, were "Big Gang Mafia"[16] and that they had accepted "huge money" from EMIC, HashCoins and Achilles Labs to keep their listings on the "Mining hardware comparison" page of the wiki, while removing other potential scams.[17] In addition to Taras and TheRealSteve,[16] BitHashMiner branded AJRGale[18] and Luke-Jr[19] as spammers.

Citing these accusations, new policies were added to the relevant areas of the wiki to bar units that have not shipped from being advertised. The claims of bribery were refuted as the mining hardware comparison page was poorly moderated and relatively obscure.[8] Taras and TheRealSteve denied having been offered a bribe.[20]

Later on February 5, a BitcoinTalk user posted a grateful message to all the users who had called BitHashMiner a scam, as he had been prepared to spend $7,000 on 7 units.[21] He claimed that the money was very important to him, and his statement stands as proof that vaporware scams could be extremely profitable even when very poorly executed and that scam accusations are crucial.[8]