From Bitcoin Wiki
Revision as of 09:21, 11 May 2015 by Bawolff (talk | contribs) (Bitcoin -> Project)
(diff) ← Older revision | Latest revision (diff) | Newer revision → (diff)
Jump to: navigation, search
BitVegas
:Not to be confused with BitVegas.eu.


BitVegas was a casino based in Minecraft. It was among the first Bitcoin-Minecraft services.[1]

It featured the most generous faucet of its time, yielding 0.002 BTC per hour to visitors.

BitVegas was a six story building. Across the six levels were a collection of games:

The building's six accessible levels were connected by elevators. The first floor served as the lobby, featuring a bar. Also connected to the first floor were two closed wings, a gift shop and a hotel. Neither of these wings would ever open, although it was possible to see their contents by freecamming. The second floor had two massive roulette tables and a slur of other games. The third floor had almost exclusively featured card games, and the fourth floor was centered on the Bacon Races. The fifth floor was reserved to users who had 1 BTC in their accounts, and had games with higher maximum bets. The top floor was technically the roof, and had several games of skill which did not allow betting. 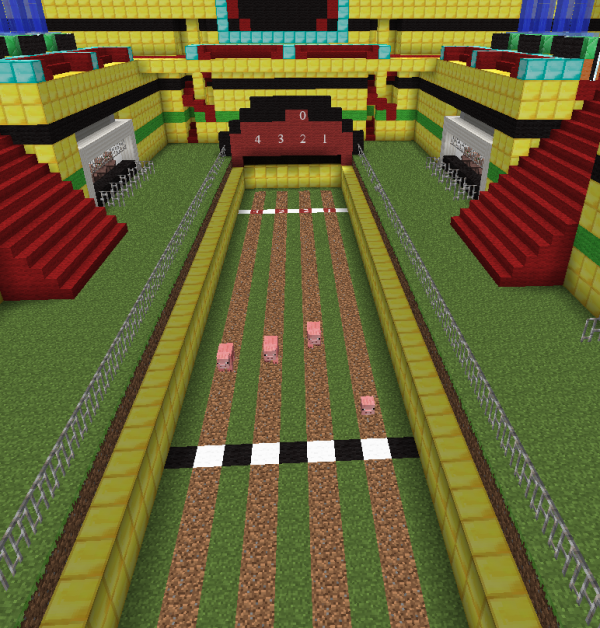 The Bacon Races
Floor 4 featured Bacon Racing, which was a comical take on horse racing. Four pigs were given odds out of 100% to win the race, and players could stake bitcoins on those odds.

Players could purchase alcoholic drinks from bars across the casino. Upon drinking a beverage, there was a 48% chance of the drinker finding double what they spent on the drink. Found bitcoins were in the form of chips in the bottle.

Upon first joining the server, the number of free gifts a player may receive was set to thirty. Once every fifteen minutes, a player could go to a "Gift Chest" to receive a free gift of .5 mBTC. Players may increase their number of free gifts by referring other players. Referrals also paid 5 mBTC up front. This very generous subsidy sparked edit wars on the Bitcoin wiki.

On September 6, a user logged into BitVegas and exploited a glitch related to Bukkit to log into the server as Murderscene and Dinnerbone. About 7 bitcoins were stolen, worth about $1,000 at the time.[2][3]

After the disappearance of Murderscene, BitVegas had essentially ran out of money by 2014. On January 20, all the games were shut down. The service remained online, and users could still deposit or withdraw, but placing bets was impossible.[4] When it became apparent that Murderscene wasn't coming back, the server was shut down on March 7. As the server had no bitcoins left, many users were left without any of their remaining deposits.[5] A month later, the BTCVegas project was started as an attempt to recreate BitVegas.