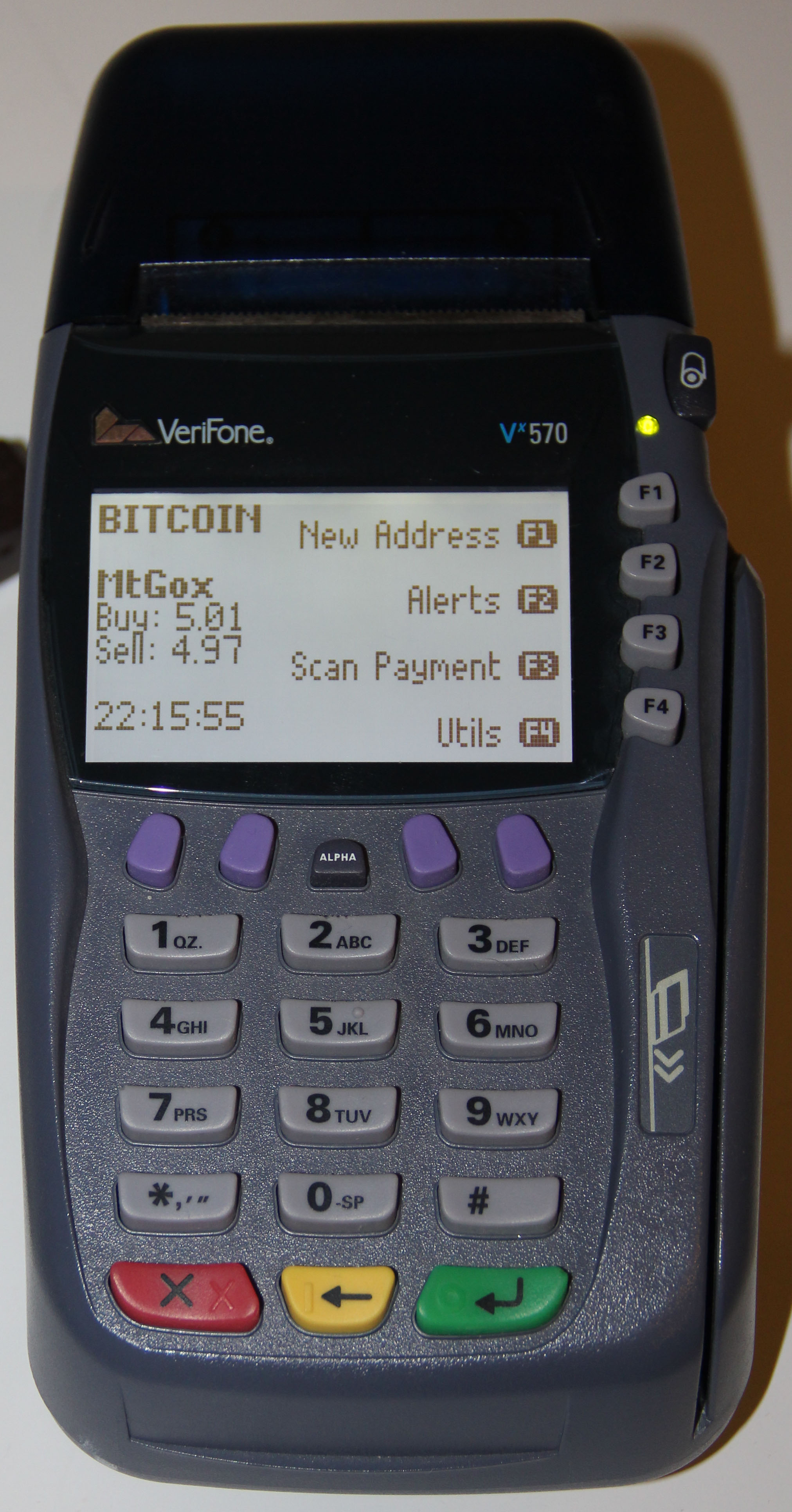 The Bitcoin POS system is based on the VeriFone Vx510 or Vx570 (pictured here) model of point-of-sale bankcard machines.

The Casascius Bitcoin POS system is a desktop retail point-of-sale acceptance system for Bitcoin "in a box". The system is based on a VeriFone Vx510 or Vx570 payment terminal, and allows merchants to easily accept Bitcoin payments from customers. It can optionally allow merchants to dispense (sell) Bitcoins.

The POS system features an Ethernet network connection, a 128x64 pixel backlit monochrome display, a receipt printer, and a 24-key keypad, all in a compact terminal. The Vx570 terminal also includes a USB port, to which a QR barcode scanner can be attached.

The POS system acts as a client for a central server run by Somebody, Inc. It does not maintain a Bitcoin block chain, but rather, sends SSL-encrypted queries to servers belonging to Somebody, Inc. in order to retrieve rate quotes and perform transactions. Consequently, it requires a constant Internet connection in order to function. Transactions cannot take place and rates cannot be quoted without a functional connection to the Internet.

The POS system and its server are an open source project that is mainly in the planning stage. The POS system is not fully functional. 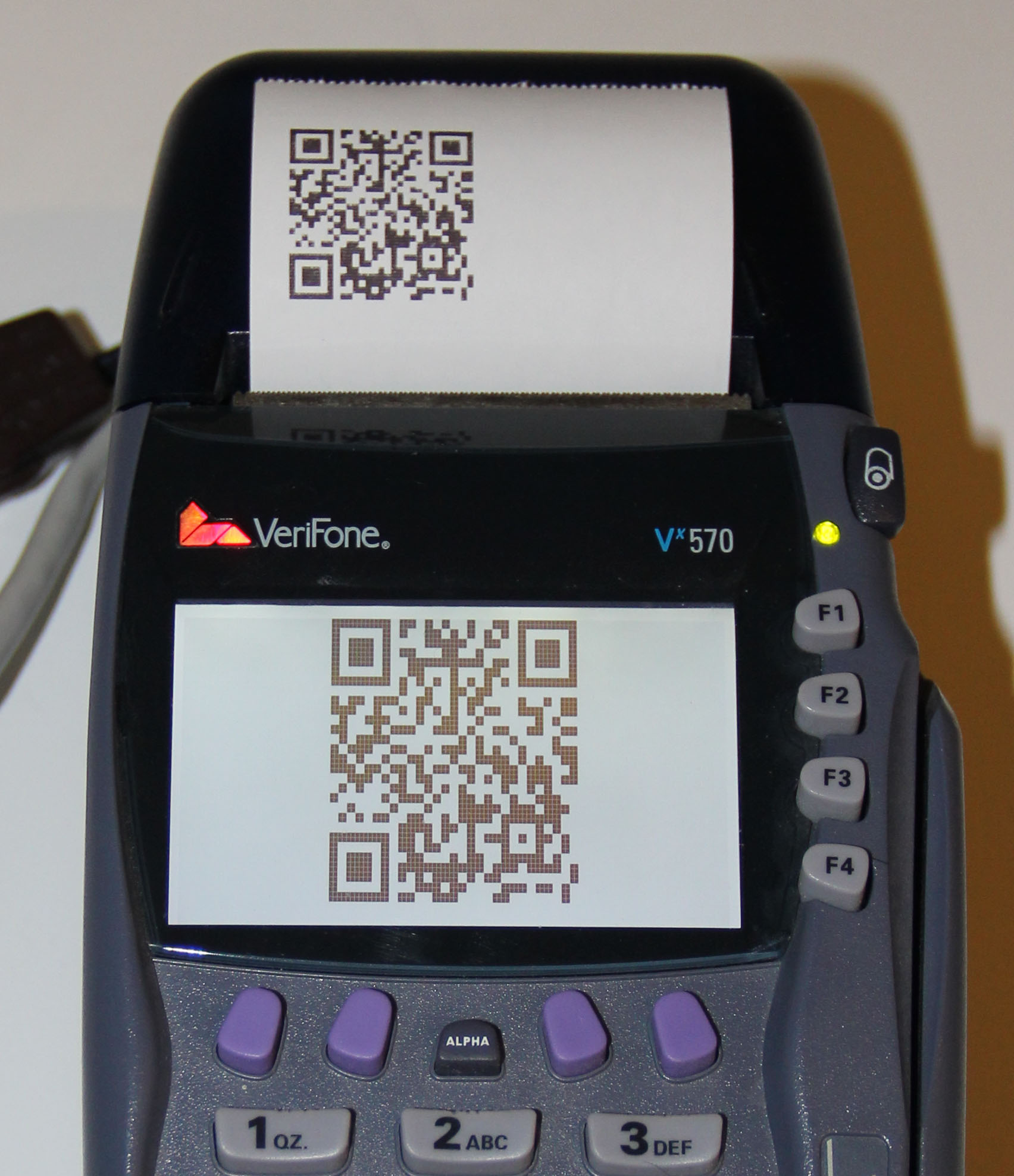 Smartphones can scan QR codes straight off the screen or receipt paper.

The POS system offers the following functionality for retail merchants:

The POS system also offers the following functionality for merchants who wish to use the system to sell or dispense bitcoins.

To use the Bitcoin POS system, simply power it up. After the boot screen, you will receive the main screen.

On the main screen, the following is shown:

Initial setup is simple. Just take it out of the box, load the paper roll, and plug the unit into power and an Ethernet network. If you are using a barcode scanner, this connects to the USB port. If you are using a fingerprint reader (to dispense Bitcoins), this connects to the port with a calculator icon (this is normally considered the "PIN Pad" port in debit card processing environments). Please note that the Ethernet port and the PIN pad port look identical, and the plugs may fit interchangeably, but they are not compatible.

The Bitcoin POS system requires an Ethernet connection to the Internet to perform any functions. Without a good Internet connection, the network status will show "No network available", the exchange rate will be missing, and transactions will not be possible.

The POS system will automatically acquire an IP address from your network via DHCP, but if you need to set a static IP, press the * key twice, and enter the network configuration password (default: "2663") to access the network setup menu. When you change the IP settings, the terminal will reboot.

The clock is set automatically from the Somebody, Inc. servers. Use the web interface to set your local time zone. Daylight Saving Time is automatically adjusted where appropriate.

From a smartphone user

To accept a payment from someone who intends to transfer Bitcoins using a smartphone, press F1. If you are expecting a certain amount of Bitcoins or local currency, enter the amount now, otherwise press Enter. Use the purple softkeys to select the appropriate currency units. A new bitcoin address and the expected amount will be generated and printed in text and as a QR code on the receipt printer. Hand this to the customer so they may initiate their payment.

Note: The same information will be displayed on-screen. If the paper roll is empty, the customer can scan the QR code or type the Bitcoin address directly from the screen.

When the customer makes their payment, this will show up as an alert on the terminal, and the terminal will beep three times. In addition, it will beep once every minute until the alert is viewed.

To view the alert, press F2. When you view the alert, you can see the actual amount that the customer paid, along with the equivalent in local currency. Note that when you print the bitcoin address, the local conversion rate used is locked for five minutes, and will be used if the payment initially arrived within five minutes of printing the address. Otherwise, the conversion rate in effect at the time the payment was received is used.

From someone presenting bearer items

To accept a payment from someone who is presenting bitcoins in the form of a typeable private key or a QR code, press F3. Then:

After you scan a code, the total for all code(s) the customer has scanned is shown on screen. If there are more codes to scan, scan them now. Otherwise, press Enter.

Review and commit (accept) the transaction at the next step. Once you have accepted the transaction, it will be initiated on the Bitcoin network and will appear as "unconfirmed".

The Bitcoin POS system automatically notifies when transactions arrive. However, the moment they arrive, they are considered "unconfirmed". There is always a possibility that a transaction may be rejected, such as if someone attempts to spend the same funds somewhere else at the same time. This possibility decreases exponentially each time a payment receives a "confirmation" (which you can see by going to F4-Utils, then choosing Recent Incoming Payments). The Alerts screen is used for notifying you of rejected payments.

If a recently received payment is rejected, the terminal will repeatedly beep four times every minute until you view the rejection alert. In addition, the beeps will be in a lower pitch than usual.

Payment rejections are rare, and this is particularly true for low-value transactions. It's even rarer to have a payment be rejected after its first confirmation. The definition of a payment rejection is the receipt of another confirmed transaction on the Bitcoin network that purports to spend the same funds to a different payee, invalidating the original transaction paying you.

Due to the decentralized way Bitcoin works, it is possible (but very difficult and resource-intensive) for people to orchestrate payment rejections. It is believed that the cost of orchestrating a rejection are high enough to preclude it from being cost-effective to attempt on low-value transactions, but becomes a potential concern as transaction size increases. The risk of rejection on higher-value transactions becomes lower each time a confirmation is received. Particularly for valuable purchases, you may consider requiring a wait of several confirmations to ensure that the payment is unlikely to be rejected. It is common for Bitcoin merchants to wait for six (6) confirmations in low-trust environments.

If your account is set up for dispensing Bitcoins, access the Dispense menu by pressing the # key twice at the main menu, and then entering your Dispensing password. Note that there is no visual indication or menu option for dispensing bitcoins - you must memorize the # # sequence.

If you have set up fingerprint authentication, touch your finger to the reader to authenticate.

At the Dispense menu, press a softkey. (Note that any or all of these options may be disabled in the setup menu).

Note that the rate for dispensing is the admin-configurable "sell" rate and may differ from the exchange rate shown on the main screen. If you enter a BTC amount, the exact amount will be dispensed.

Dispensing to a Bitcoin address

Note: This option is disabled by default, and will not appear on the menu if not enabled. Use the admin menu to enable it.

You can access admin tools to perform functions like fingerprint setup and viewing the amount of BTC available in your dispensing account by pressing the first purple softkey at the Dispense menu.

In the Admin Tools menu, you may do the following: