If you're running a business that accepts bitcoin, you should use a full node wallet in your backend to accept bitcoin. If using a centralized web API like blockchain.info or blockr.io instead, or using a payment processor like Bitpay, BitGo or Coinbase.com, then there are significant downsides that you should be aware of. 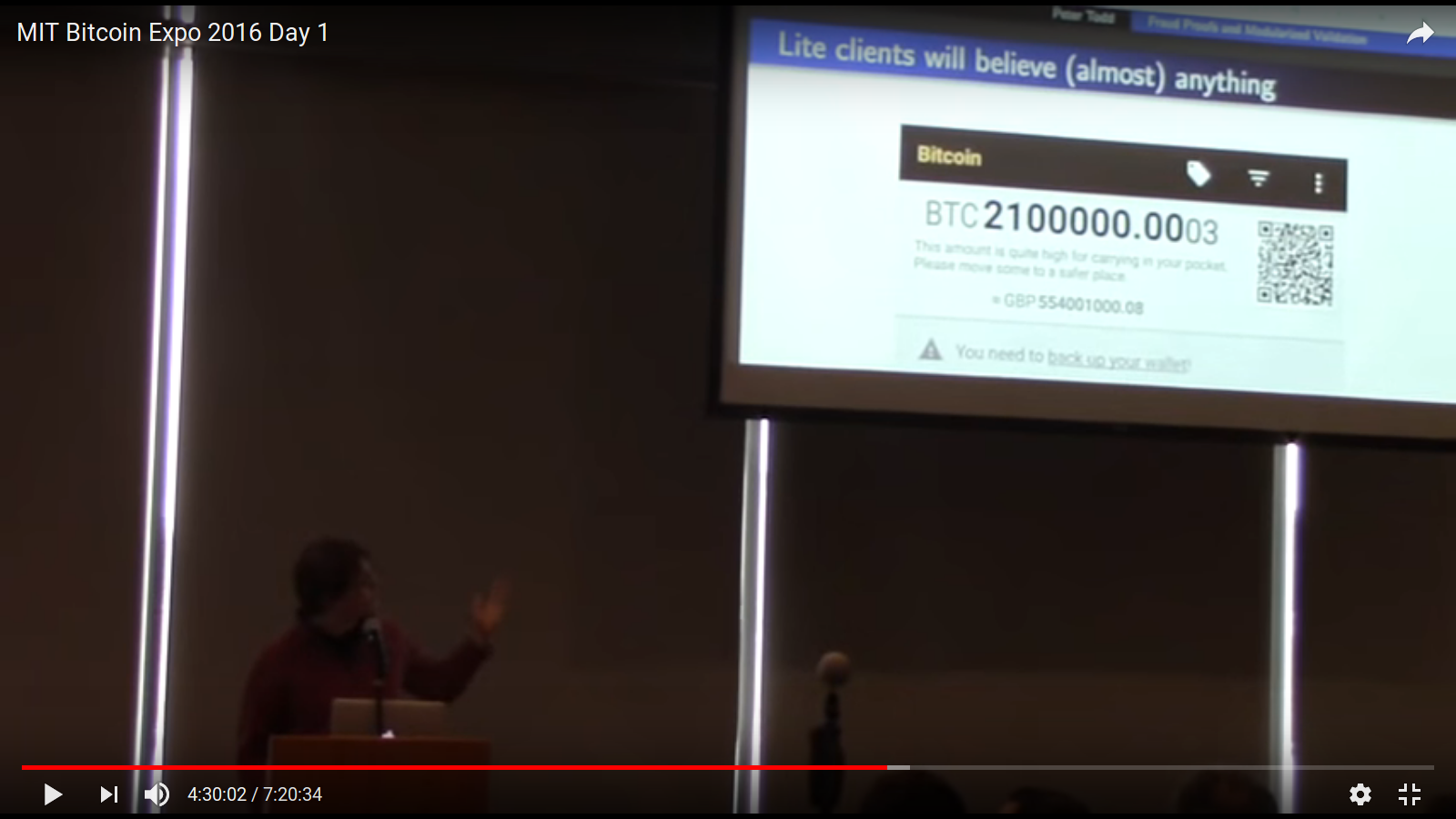 An example of a lightweight client happily accepting a fake transaction. If the attacker had some hashpower then this transaction could be made to have confirmations too.

This is the most important reason, although it's a little complicated to understand.

If your business took cash banknotes or gold coins as payment, you wouldn't accept them without carefully verifying that the banknotes were genuine and that the gold was real. The same is true with bitcoin, payments must be genuine or else your business might be left out of pocket.

For a bitcoin to be genuine, it must follow all the rules of the bitcoin network. Rules like:

Only a full node under your control give you certainty that all these rules of Bitcoin are followed, which therefore checks that your incoming payments are genuine. There are small scale attacks possible where your business may be left holding fake bitcoins that have no value and disappear soon after.

But if an bad actor were ever to attack Bitcoin in this way, it would likely be an attack on the entire currency rather than your single business. So if Bitcoin is valuable to you, and you want to see it survive then it is essential to use a full node for your business' transactions, not a payment processor or lightweight wallet.

When a centralized web API like blockchain.info goes down, any business payment processor relying on them will go down too.

A full node is part of a peer-to-peer network, which has very strong properties of resilience and uptime. The p2p network will never go down unless bitcoin itself dies.

Bittorrent, a similar p2p network to Bitcoin, is known for its unrivaled and impressive uptimes.

World’s Oldest Torrent Is Still Being Shared After 4,419 Days

The torrent file of The Matrix ASCII was created more than 12 years ago (4,419 days) on December 20, 2003. Even though the original site is no longer online, it still has 8 active seeders at the time of writing.

There are also people actively downloading the file, most likely after they found a copy of the release on one of the torrent sites where it remains available. To the best of our knowledge, this means that The Matrix ASCII is the oldest torrent that’s still being actively shared..

On the other hand, web APIs like blockchain.info that have a single point of failure go down all the time.

Often businesses use bitcoin in sectors that are frowned-upon or outright blocked. One of the very early uses of bitcoin was by Wikileaks to accept donations after Paypal and Visa imposed a worldwide blockade. Many online poker sites in the US are also blockaded by banks and payment processors and so use bitcoin instead.

In one case a payment processor attempted to strongarm a business into spying on their users.

“From Sunday June 19th 2016 we are no longer allowed to accept payments via PayPal,” states the company Blog. “PayPal has demanded that we monitor data traffic as well as all our customers’ files for illegal content. They have also asked us to provide them with detailed statistics about the files types of our customers sync and share“ “Since complying with this demand would violate German / European data protection laws (and also be morally wrong in our opinion) we have declined to comply with this demand.”

On another occasion, the Bitpay payment processor shut down its business relationship with torservers.net, however the non-profit continued to accept bitcoin directly and was not affected.

Unfortunately, it has come to our attention that your business presents a higher risk for us and therefore we will no longer be able to service you. More specifically, we have seen a number of higher risk transactions during our routine monitoring program and this has led to the decision to close your account.

If your business fits this profile, switching out one centralized payment method (Bank Transfer, Visa, Paypal) for another (Bitpay, Coinbase.com, blockchain.info) does nothing to stop your payments being shut down.

A Bitcoin full node is the most censorship-resistant way of using bitcoin. By connecting directly to the p2p network, nothing can stop you from receiving or sending payments.

If you use a centralized web API or payment processor, that institution will know what all your bitcoin addresses are. It will know what your business's entire cash flow and income is.

On July 20th 2016, the owner of the torrent site KickAssTorrents was arrested and the website shut down. One contributory factor was that the owner accepted bitcoin donations using Coinbase.com's payment processor.

In 2012, KAT started accepting Bitcoin donations, and U.S. officials say records received from Coinbase revealed the Bitcoin donation address was maintained by the exchanges services. The Coinbase account was registered to Artem Vaulin located in Kharkiv, Ukraine. The affidavit reports that $72,767 USD in bitcoin had entered the owner’s donation wallet.

A bitcoin full node does not reveal to any third-party server which addresses are in it's wallet. It downloads the entire blockchain history from the p2p network, and therefore preserves your privacy in this respect.