Backing up your wallet

From Bitcoin Wiki
(Redirected from Backingup your wallet)
Jump to: navigation, search

The data directory is the location where Bitcoin's data files are stored, including the wallet data file.

By default Bitcoin will put its data here:

You need to do a "ls -a" to see directories that start with a dot.

If that's not it, you can do a search like this:

To change the directory Bitcoin stores its data in:

By default Bitcoin will put its data here:

Bitcoin's data folder will open. For most users, this is one of the following locations:

If you have trouble browsing to these folders, note that "AppData" and "Application data" are hidden by default.

Backing up your wallet files

Note: Using Dropbox to back up your Bitcoin data is not recommended as doing so introduces the following security concerns:

For these reasons, an alternative that always uses password authentication such as Wuala should be used. Wuala's servers do not store your encryption key and the program authenticates with the password each time it is started.

Whether you use Dropbox as your backup or not, it is advised to use what Steve Gibson calls "pre-Internet encryption" which means to use some form of encryption on your files before you back them up, in case an attacker gains access to that backup. Make sure to pick a password that is memorable but secure.

The only file you need to back up is "wallet.dat" which can be done one of two ways. To make a copy of the wallet.dat file, ensure that Bitcoin is closed and copy this file somewhere else. The other way is to use the backupwallet JSON-RPC command to back up without shutting down Bitcoin.

Once a copy has been made, encrypt it, and put it in two or more safe locations. Consider the risk due to theft, fire, or natural disaster in proportion to the value of bitcoins stored in the wallet.

Follow these instructions to backup all the bitcoin data (wallet and block chains) to an encrypted disk image.

Don't forget to mount your image before using Bitcoin and unmount it after quitting.

Backing up just your wallet file

Follow these instructions to backup just the wallet.dat file. This results in a smaller disk image, but it's more complicated to do. 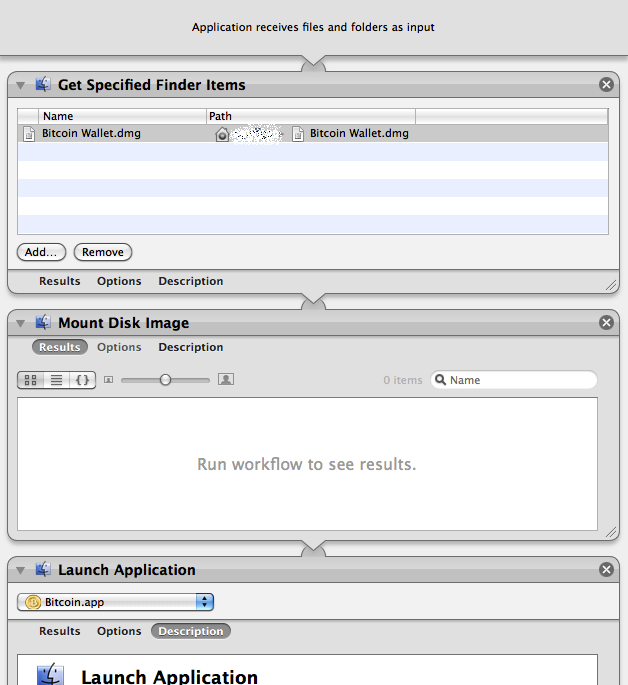 Don't forget to mount your image before using Bitcoin and unmount after quitting it.

Note: If you start the Bitcoin application without having the image mounted, the application will overwrite your symlink with a new wallet. If that happens, don't panic. Just delete the new wallet.dat, mount the image, and recreate the symlink like above.

Automation: You can create a small application using Automator (included in OS X) to automatically mount the wallet and then launch Bitcoin App. See the Screenshot on how to do this.

If one doesn't want to use encrypted Disk images, then a small shell script can be used instead that takes care of decrypting the wallet, launching bitcoin client, and encrypting it after the client exits. This script works on both OSX and Gnu/Linux: bitcoin-launch-script

One of the simplest methods for storing an appropriately encrypted archive of your wallet.dat file is to send the archive as an email attachment to your own e-mail address. Services like Gmail use very comprehensive distributed networks that make the loss of data very unlikely. One can even obfuscate the name of the files within the archive, and name the archive something less inviting, such as: 'personal notes' or 'car insurance'.

Another solution is to use a file storage service like Wuala ( encrypted, instructions), Dropbox (after encrypting the wallet first) and others, including the more secure SpiderOak.

Linux users can setup backups using cron by telling it to run a backup script at set intervals of time. Run 'crontab -e' and add this line near the bottom:

This cron line will run the /usr/local/bin/backupwallet.sh script at the 01 minute of every hour. Remember to add a newline after the last line of the crontab file, or else the last line won't run. You may also wish to ignore the script's output by appending " > /dev/null 2>&1" to the line (this will also prevent emails from being sent).

Be sure to modify the script options to fit your setup. After you save, make sure the file can be executed properly by the cron user. Common permissions for files in /usr/local/bin/ can be applied using (verify with your distribution!):

Assuming your backup is recent enough that you haven't used up all of your key pool... restoring a wallet to a new (or old) location and rescanning the block chain should leave you with all your coins. Just follow these steps: