Mt. Gox halted withdrawals on 7 February 2014 due to insolvency[1] after an apparently undetected theft that had been occurring since 2011. The company said it was pausing withdrawal requests “to obtain a clear technical view of the currency processes”.[1] Mt. Gox would also suspend trading on 24 February. Bitcoins amounting to a half billion US dollars at the time of the event had been missing, making it the largest-ever bitcoin loss by USD value.

Wired Magazine reported in November 2013 that customers were experiencing delays of weeks to months in withdrawing funds from their accounts.[2] The article said that the company had “effectively been frozen out of the U.S. banking system because of its regulatory problems”. Customer complaints about long delays were mounting as of February 2014, with more than 3300 posts in a thread about the topic on the BitcoinTalk online forum.[3]

Mt. Gox issued a press release on 10 February stating that withdrawals were completely halted due to transaction malleability: “A bug in the bitcoin software makes it possible for someone to use the Bitcoin network to alter transaction details to make it seem like a sending of bitcoins to a bitcoin wallet did not occur when in fact it did occur. Since the transaction appears as if it has not proceeded correctly, the bitcoins may be resent. Mt. Gox is working with the Bitcoin core development team and others to mitigate this issue.”[4][5][clarification needed] On 17 February, with all Mt. Gox withdrawals still halted and competing exchanges back in full operation after the transaction malleability scare, the company published another press release indicating the steps they claim they are taking to address security issues.[6] In an email interview with the Wall Street Journal, CEO Mark Karpelès refused to comment on increasing concerns among customers about the financial status of the exchange, did not give a definite date on which withdrawals would be resumed, writing that the exchange would impose "new daily and monthly limits" on withdrawals if and when they were resumed.[7] A poll of 3000 Mt. Gox customers by CoinDesk indicated that 68% of customers were still awaiting funds from Mt. Gox. The median waiting time was between one to three months. 21% of poll respondents had been waiting for three months or more.[8] 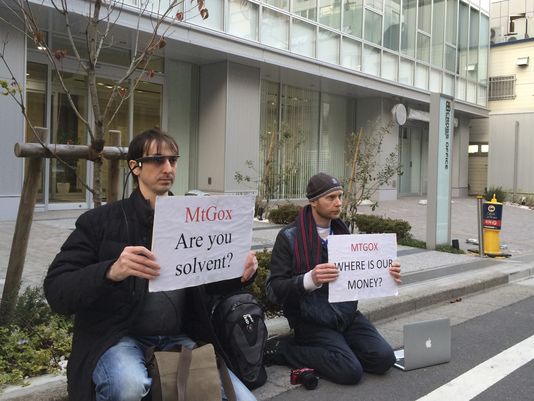 Protesters sit outside Tibanne's headquarters
On 20 February, with all withdrawals still halted, Mt. Gox issued another statement, still giving no date for the resumption of withdrawals.[9] A protest by two Bitcoin enthusiasts outside the building that houses the Mt. Gox headquarters in Tokyo continued.

Citing "security concerns", Mt. Gox announced they had moved their offices to a different location in Shibuya. Bitcoin prices quoted by Mt. Gox dropped below 20% of the prices on other exchanges, reflecting the market's estimate of the unlikelihood of Mt. Gox ever paying their customers.[10][11]

On 23 February, Karpelès resigned from the board of the Bitcoin Foundation,[12] and all posts on the Mt. Gox Twitter account were removed.[13] The exchange suspended all trading the following day. Hours after trading halted, the website went offline, returning a blank page.[14][15][16] An alleged leaked internal crisis management document claimed that the company was insolvent, after losing 744,408 bitcoins in a theft which went undetected for years.[14][15][17][18] Six other major bitcoin exchanges released a joint statement distancing themselves from Mt. Gox shortly before Mt. Gox's website went offline.[19][20]

On 25 February, Mt. Gox reported on its website that a "decision was taken to close all transactions for the time being", citing "recent news reports and the potential repercussions on MtGox's operations". Karpelès told Reuters that Mt. Gox was "at a turning point".[21][22][23][24]

On 28 February Mt. Gox filed for bankruptcy protection in Tokyo, reporting that it had liabilities of about 6.5 billion Japanese yen ($64 million at the time), and 3.84 billion yen in assets.[25][26] The company said they had lost almost 750,000 of its customers' bitcoins, and around 100,000 of its own bitcoins, totaling around 7% of all bitcoins, and worth around $473 million near the time of the filing.[25][26] Mt. Gox released a statement saying "The company believes there is a high possibility that the [bitcoins] were stolen,”[27] blaming hackers,[28] inciting a search for the missing money. Karpelès said technical issues opened up the way for fraudulent withdrawals. Mt. Gox also faces lawsuits from its customers.[29][30] On 9 March, Mt. Gox filed for bankruptcy protection in the US, to temporarily halt U.S. legal action by traders who alleged the operation was a fraud.[31][32][33]

On 20 March, Mt. Gox reported on its website that it recovered some bitcoins — worth around $116 million — in an old digital wallet from 2011. That brings the total number of bitcoins the firm lost down to 650,000 from 850,000.[34] On 14 April, Mt. Gox lawyers said that Karpelès wouldn't appear for a deposition in a Dallas court, or heed a subpoena by FinCEN.[28] On 16 April, Mt. Gox gave up its plan to rebuild under bankruptcy protection, and asked a Tokyo court to allow it to be liquidated.[35]

Private investigators have looked to the block chain for evidence and synopsis of the theft. 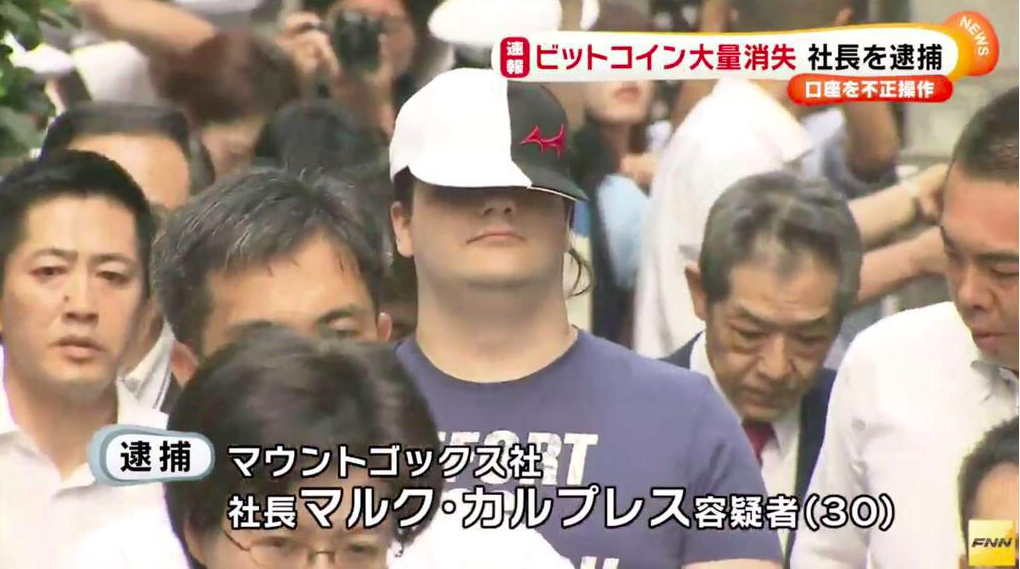